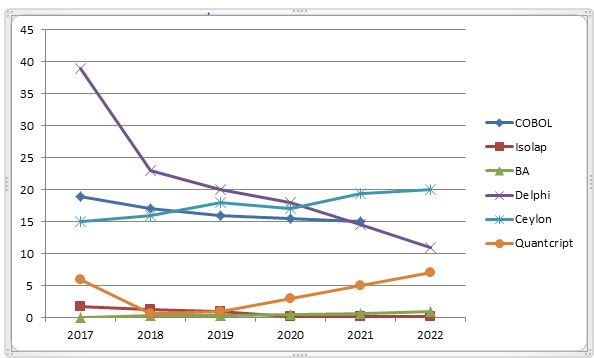 Maybe that explains the success of certain languages and their ecosystems: nobody thinks to ask if they are the right tool anymore… At least, that’s so when the product isn’t, indeed, critically bound to such a technical choice, and hence market- and money-induced blindness don’t waste everything… Apparently…

Anyway, if I were you, I wouldn’t enrich my skillset just looking at boring lists of most paid this or that. It’s a dangerous path (maybe not for the wealth, but for the health of the consultants’ built digital world, it kind of is.)

Articles with titles like “Top N something” are almost click-bait. Be prepared to read BS — which doesn’t mean there isn’t some research and value in those words.

Well, do you really want to become rich programmer? Then, maybe the article Top 10 highest-paying programming languages in 2020 appeals to this secret desire.

Well, I’m glad that’s here since I’ve loved it, but I don’t think it will endure. I suspect that Perl appears to be alive and kicking in scripts on few systems, but products heavely relying on that are going to fade — if they still exist. And I daresay that youngsters should not want to maintain legacy systems.

Then, there’s Raku (formerly Perl6 — but it is a brand new language, hence the name change), which is at a whole new incredible level. Check it out.

Learning Perl as a side skill won’t hurt, anyway.

At the second place there’s Scala.

This makes me think, the average salary is tied to the industry where the language is mostly used. It could be a very small niche, but very rich. This means you could earn that much (maybe) iff you manage to enter that niche — which is a niche, that is, likely there’s a lot of competitions, just to mention one thing.

And, more importantly, I doubt Scala is the core skill which makes you worth the salary: you learn Scala but you haven’t those other skills… and you won’t be worth that salary at all.

Also, niche might be fragile. Or maybe not: it seems like Scala is appreciated in the finance world, in the quants’ (quantitative analysts) world. There must be a lot of money around there, right? But then, there are also financial crises…

But it never resonated with me. I prefer other languages.

At the third place… Well, I like Go. I knew bits of Erlang before Go, and Go has something that made me think about convergences (study them both and you’ll understand why).

Go was designed by, among others, Rob Pike and Ken Thompson, which is a feature by itself…

You can add it to your programming-language-I-know collection, and if you get a job for it, I imagine it will be fun.

Interesting choice of words. Do the same jobs ask for alternative programming languages or focus more on other critical skills?

Rust is another modern language which is worth learning (they say). I haven’t explored it yet — except for hello worlds and few more things, because of it being strongly typed and focused on safety aspects.

I like Ruby. It is a great language, I think — but the “interpreter” (the one I know and use) isn’t as fast as one could wish. The fact that it was so slow pushed me to write a GolfScript interpreter, wrecked so far — but still in my mind sometimes.

Another one which is worth learning, in my opinion. But not just to get a job that requires it…

I see all of them as a basic common ground to know in order to do tasks you, as a programmer, could need everyday.

Still??? Why still? Is he suggesting that it is strange that shells still exist?

He’s also putting Bash and PowerShell a little bit too close. Shells in general may differ a lot.

Anyway, if you don’t know any shell on your system, go and learn it definitely. Would they hire you just for that? It sounds strange to me, but hey, the author must have done a proper search, right?

That’s odd, considered that Apple, which was the main and maybe only backer for this language, replaced it with Swift. Objective-C code surely is still around, but I wouldn’t bet on the language, no matter how they pay.

I think it isn’t even worth learning anymore.

And don’t get me wrong: I’ve loved the language, its odd Smalltalk-spiced syntax — I like Smalltalk, knew bits of it when I’ve met Objective-C, so that I haven’t found the latter alien and cumbersome!

Also, I think Objective-C is a better “C with classes” than C++ is. But…

But, no matter how much they can pay you: I think you should steer away — unless you really don’t find other options and you already know Objective-C.

This could be for the same reasons Scala is at the second place: niches. But then again, maybe the difference isn’t in the sound Haskell skill but in other skills that must be in the package.

Anyway, if you like pure functional languages, Haskell is…

Worth learning, more than Scala, I think.

Another niche — I think it should be scientific computing, or alike. Partial intersection with the same niche of Scala, maybe.

And about it and me, I can say what I’ve said for Rust, more or less (if you can read Italian).

Python is among the most popular programming languages of the year.

At least you can understand that the most popular doesn’t rhymes with “the most paid”.

Could it be the same for Python?

Anyway, I suggest you put Python in your toolbox!

The fascination of this kind of lists may be high. But are they useful? I don’t think so. They can be misinformation, i.e., they can give wrong clues and suggest you a path that doesn’t bring you to your destination.

Do not use this article to choose your own path either.