Java and its silly war against unsigned integers 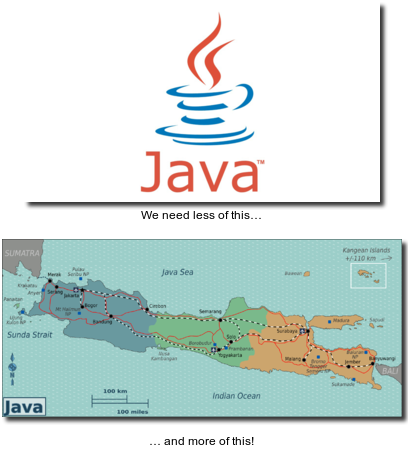 This is a signed 32 bit integer:

If you want to get the higher 8 bit, you should do a logical right shift, that is, >>>.

The logical left shift doesn't exist — because it is the same as the arithmetic left shift; so we haven't problems, unless sign extension enters the scene. The first clue comes from this:

The compiler says error: possible loss of precision, and one may wonder why: 255 fits into a byte graciously. But the byte is signed, too: the higher positive value it can hold is 127. For this reason, 0xFF must be an integer, which can't be put into a byte. We can fix this by casting:

But indeed this way we are hiding something. If we write

Java doesn't complain, even if we know that -1 is 11111111 represented as a binary, that is, FF in hex. This makes sense1, but it's annoying when you want to manipulate bytes as “sequences of 8 bits”.

Now s is 0xFFFFFFFF instead of 0x7F7F01FF. This is because each byte “becomes” an integer, and being everything signed, it gets sign extended. Thus we have:

In fact -1 in a byte (FF) is still -1 in an integer (FFFFFFFF)… Also, consider that the shift happens after the sign extension.

To avoid these effects we need to mask the bytes we want. We can avoid this with the higher one, the one which gets shifted by 24 — but I do it anyway, so that everything can be aligned and looks like it looks for reson you can imagine; this is also why I write the wasteful << 0, which hopefully won't generate a shift instruction.

On the other hand, if we keep our bytes into ints…

The literal constants are all integers, e.g., 0x000000FF. No sign extension. Easy. Here we are assigning constants; when we read or extract them as bytes someway, likely we need & 0xFF to cut everything an unwanted sign extension could have done.

If we need to deal with 32 bit (unsigned) integers, likely it will be better to keep them in long (64 bit signed integers). But this doesn't mean we need to be less careful2.

Now, suppose you have to read a 32 bit unsigned integer from a file, stored in big endian order3, to manipulate it later someway.

The L is important, otherwise 0xFFFFFFFF would be an -1 (int) which will be sign extended to a -1 (long), that is, 0xFFFFFFFFFFFFFFFF.

Dealing with data in Java is more painful than it needs to be. I am glad I am not alone blaming the choice of not giving Java the unsigned types.

And of course it's a well known discussion, and in fact you can find articles like this:

This is going to be a huge help when dealing with data over the wire and re-implementing algorithms from C.

The suggestion of naming variables with a final U or _U isn't a big help, indeed, and still there isn't anything like unsigned int or unsigned long,

Well, even in Java 8, long and int are still signed, only some methods treat them as if they were unsigned.

This is what Java has to offer, but not on its primitive types.

Once we are sure we have the right sequence of bits into our int or long, and we want to write it to a file, we don't need to worry about signedness anymore (but we need to choose the endianness we want, in case it isn't big — default for Java).

In both cases we need (int)x if x is a long.

Using a long for an unsigned int or an int for unsigned byte can be useful in situation where otherwise sign extension would be annoying, forcing the overuse of masking to obtain the right result.

If we're ok with just reading an int, manipulating few bits with ors and/or ands, and write it somewhere, we don't need extra care because of signedness. E.g.,

In assembly, registers hold data, and signed/unsigned registers don't exist. In fact, signedness is just a “special” interpretation of a certain configuration of bits — according to two's complement. This interpretation isn't carved into the name of a register5: it is an action, and it must be done by instructions.

In order to treat a number into a register (or in memory) as signed, you must pick the right instructions which do so — i.e., instructions that implement their operations to consider the two's complement representation. When you use high level languages, compilers and interpreters do it for you according to the specification of the language (and the target CPU).

When you have, say, 32 bit registers, and you store into one of it a byte, and then you start using the whole register, no sign extension happens. You must explicitly do it.

In assembly Motorola 680x0 (the CPU which ran the Amiga and the Apple's Mac before they switched to PowerPC first, and then to Intel x86),

A little explanation. clr.l is a clear (clr) instruction done on the whole 32 bit register d0 (.l means long, and on that architecture the long is 32 bit long…)6. By clear we mean to put all the bits in the register to 0. MC680x0 had 8 data registers, d0-d7. Imagine this in C:

The second instruction “moves” (copies) the value 0x80 in d0. The move instruction doesn't care about signedness. It doesn't know what it is, it doesn't need it. It just copies the value. The .b means this: operate only on the (lowest) byte of the register. That is, no matter what the other bytes hold, modify only the less significant byte.

The last instruction uses the whole data register and copies its value into another data register (d1). Again, it doesn't care about signedness or whatever. Indeed, it can't: it would be mean to remember that there was a move.b, and to pretend to know the intention of the programmer was to have a signed number which now she wants to copy in another register.

The CPU isn't in charge of such a reasoning.

If the programmer knowns that the lowest byte of d0 is a signed value, and so she wants to extend the sign because now she needs to use the whole data register…

But, as said in a note, nobody used clr.l to clear (set to 0) a data register, then just to move into it a byte and to extend it! All this can be done with a single instruction, moveq (since 68000 already):

There are other ways — but this isn't interesting for my point.

What I am trying to say is that at low level, integers are more naturally unsigned than signed. “Special” instructions are known to handle signedness, doing whatever they need to to take two's complement into account. The programmer must explicitly program the processor to do sign extension, and she can always opt for instructions which don't “implement” two's complement rules. So that nobody gets in the way of messing with your bits if you don't want to, and you can always consider as unsigned a datum which you treated as signed before, if it is now what you need.

Higher level languages hide/abstract all this, and this is usually good, except when it isn't — sometimes by design.