When my Ubuntu GNU/Linux distro received the "alert" that it wasn't supported anymore and the upgrade failed, instead of finding out why, first I tried to transform the distro into a LTS one (not totally successful because I had to downgrade too many packages), then I decided to compile what I "needed"; but my final thought is that it is not a good idea mixing automatically installed packages and packages compiled by you (out of the APT world), especially if you begin updating libs which many other programs rely on, or if you compile the last version of a program that needs the last version of a "core" lib. To make it short, the system started to behave inconsistently (maybe since I circumvented some dependency…). Time for a brand new installation.


I decided for a Debian distro, so picked the wheezy Debian. I hate these swish codenames. I want the version number; a name don't tell you if it's newer or older. Anyway, there's this strange habit. Debian Wheezy it's Debian 7.0. The “technical” reasons for abandoning Ubuntu are not too strong (but there's some strong concern about Canonical), but there are others that are enough for me: trying something new; being a little bit scared of Unity; wanting a system I feel in control of, maybe more purity…

I think Unity gives a horrible user experience. But I went towards Debian Wheezy blindly, ignoring the world of GNOME Shell and GNOME3… Of course I can change DE (and stick to a tiling window manager, I think they have some advantages for some kind of usage), but this does not fix what's wrong in the new GNOME.

Human beings can become accustomed to anything, but this does not mean the thing they become accustomed to is better than the previous one. “Modern” GUI tends to please average users (the Windows-like users), to blink to scenic effects more than substance. They tend to estrange the user from his/her power of customizing things: you can heavely customize everything, but you must emancipate yourself from being an average user or exploit intuition as you did before. Since the average user is dumb and the less s/he must configure, the more s/he is happy: you get things that way and that way likely fits your need (the Big Default Promise). This is portrayed also by the style: clean, apparently simple, no panels crowded by buttons, switches and so on. The user must not be flooded with possibilities put before her/his face as features s/he must be interested in.

Here an unordered list of my almost disappointing experience and other interleaved thoughts. 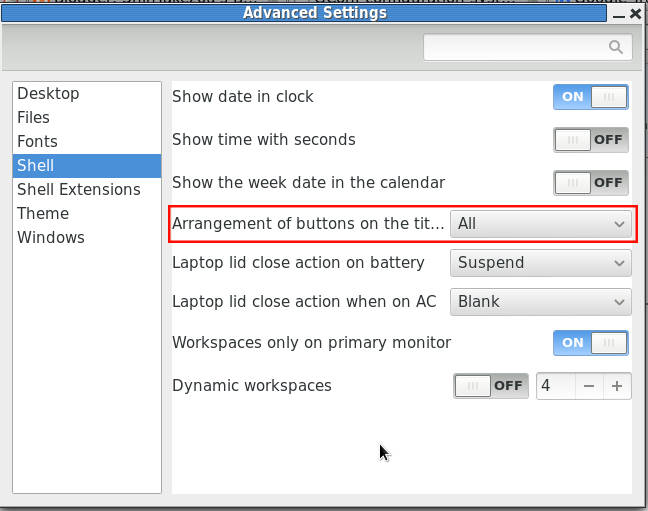 For now, it's all about complaining for removed features, settings or added problems. But if I will stumble upon another issue or have another thought about my experience using GNOME3, I will add it to this list, or maybe I will create a new shorter post just for the real issues.
Posted by Mauro at 14:14
Email ThisBlogThis!Share to TwitterShare to FacebookShare to Pinterest
Labels: dconf, debian, desktop, extension, gconf, gnome, GNU/Linux, gsettings, novice, pulseaudio, user experience, wheezy